These days, being hot isn’t just about winning the DNA lottery and hiring a good stylist. Want proof? Take a good look at the 20 awe-inspiring women below.

They’ve conquered social media and dominate newsfeeds. They make or break trends. And with millions of fans following everything they do, these women are as savvy as they are sexy, their careers expanding into new territory all the time.

Sure, there’s probably a massive make-up/styling/general-fussing-over team at play, plus an army of social media and branding consultants. But the faces to break a thousand hearts deserve our applause and more, especially considering that these women are actresses, singers, models and bona fide businesspeople.

Let it be known that our annual round-up of the hottest women in the world aren’t just pretty faces (though we’re hardly complaining).

From a Real Housewives afterthought to the princess regent of supermodels, Gigi Hadid has navigated her career better than Lewis Hamilton at the Monaco Grand Prix.

It all started with a Desigual show in 2014. From there, the LA native racked up gigs with Carine Roitfeld, Vogue (several issues of them), Versace and Chanel, paving the way to the throne with a series of front covers and closing runway appearances. Factor in the model’s must-have of a famous boyfriend – in this case, Zayn Malik – and Gigi is set to conquer hearts and column inches for years to come. 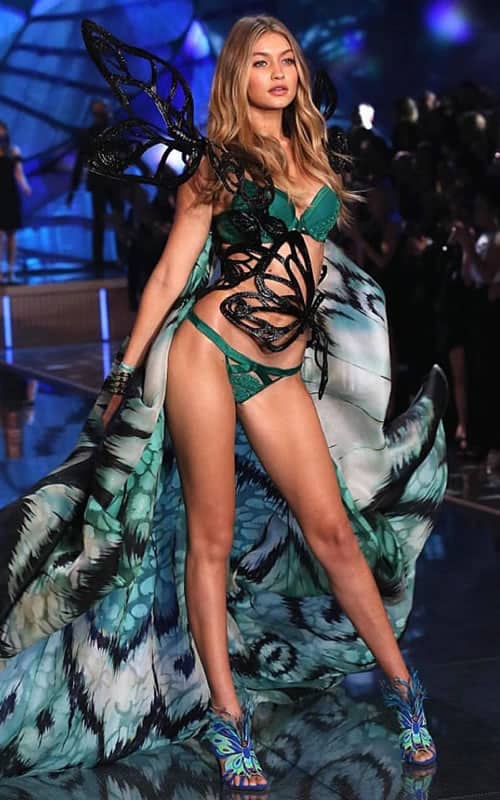 Turns out good things do come in pairs. While Gigi got a head-start in the modelling career, Bella is hot on her tracks – just with a slightly different career path. The elder Hadid goes for the all-American girl-next-door, yet Bella is happier to play the black sheep in a series of topless shoots, risqué outfits and a barely-there Victoria’s Secret appearance.

Granted, her mandatory high profile boyfriend The Weeknd recently became an ex. That simply means there’s a vacancy for a very significant other that we’ll happily fill. The Kardashians are the Hollywood equivalent of an indulgent, definitely-not-good-for-you meal. You know you shouldn’t, but resistance is futile. One of the younger flagbearers – Kendall – is proving to be far less divisive than the TV show that propelled her family to fame.

Which is a real cultural anomaly, considering her CV. There was the Carry On Protest rejig of Black Lives Matter via an ill-advised Pepsi ad. Then there was the Notorious BIG ‘vintage’ t-shirts that transposed her own face alongside one of hip hop’s most revered figures – despite the fact they’d never even met. And we still forgive her, every single time. Can’t think why. Like the Hadids, the Jenners harbour their own black sheep. Instead of courting high fashion shoots however, this one is more at-home in front of an iPhone camera – a shop window in which she’s earned millions.

Not that we’re levelling this as a criticism. Pair Kylie Jenner’s clear business acumen with a body that is worth every penny, and you’re left with a young woman as shrewd as she is attractive. Nicole Scherzinger has quite the pair of lungs. She fronted two albums as part of The Pussycat Dolls, released two all by herself, and even had time to squeeze in a couple of appearances on the West End in Cats. Then there’s the occasional acting spot in Moana and a frankly unnecessary TV remake of Dirty Dancing, her flexibility hinting at the American singer’s enduring success.

We can’t quite forgive her X Factor habit, but we reckon most would happily string some bright-eyed, provincial karaoke singers along if Simon Cowell negotiated the salary. You pay them bills, Nicky (and keep us watching). There’s only one Emily Ratajkowski, and you still can’t pronounce her name properly. The woman that made ‘Blurred Lines’ a cultural phenomenon (though only Robin Thicke can be blamed for the backlash) has gone from strength-to-strength in Hollywood.

She’s not simply content with steaming up your Instagram feed, either. The London-born model is making a play for the big screen too, appearing in Gone Girl and We Are Your Friends in all her wonderful, technicolour glory. Kim Kardashian haters can back off. Not only did she reclaim excessive use of the letter K back from hood-wearing rednecks, she’s made a mint by identifying what the people want: her.

Through Instagram, television and magazine covers, the most famous Kardashian-Jenner has built a brand by just being her, and even managed to bag one of hip hop’s pickiest figures in the process: Kanye West. Detractors may feel entitled to their criticism, but it won’t put them on the same pay grade. Jourdan Dunn is the ultimate girl-done-good. From humble beginnings in Greenford, the 26-year-old became the first black British woman to appear on Forbes’ top-earning models list – all while juggling the travails of motherhood.

Her portfolio is proof of sheer hard work, too, with the likes of Marc Jacobs, Chanel, Balmain and Burberry all previous paycheques that show no sign of Dunn fatigue. Thank God. Margot Robbie, the rose of Wall Street, harks back to a Golden Age of Hollywood when the roles were coveted, and the actresses behind them even more so. The 27-year-old is only set to increase the trend, too.

Appearances in The Legend Of Tarzan and Suicide Squad – which, let’s be honest, she single-handedly made watchable – all point to great things for the Australian actress who is more than deserving of leading her next big flick. Sorry fellas, but Margot’s better than all of you put together. Rihanna has a lot to contend with. Not only is she harangued by the press about her love life almost daily, she has to bear witness to millions of poorly-coordinated white people try to bogle to ‘Work’. Which, frankly, must be torture.

That said, the queen of Bajan pop and IDGAF Instagram comments has spawned 11 number ones on the Billboard Hot 100, eight albums in almost as many years and collected over 141 international music awards. You can’t blame people for dancing. Gossip Girl was the mid-noughties’ biggest guilty pleasure, labelled as one of the most shocking teen dramas of its time. It wasn’t. Blake Likely however, was one of the best things about it.

She’s graduated from piss poor scripts about Upper East Side brats, and is taking on decidedly more adult roles – including a wife and full-time parent alongside Ryan Reynolds. Even with her outrageously priced homewares pet project Preserve, the Age Of Adaline star still gets our XOXO. You’d be forgiven for thinking Chrissy Teigen is but a Hollywood myth. She’s smart, funny, ridiculously beautiful and has made a habit of antagonising certain presidents on Twitter. In short, the unicorn of girlfriends.

In addition to being the best all-rounder of womankind, the part-Thai, part-Norwegian model can claim quite the career, too: think Sports Illustrated, Maxim and even a co-host spot on Lip Sync Battle. John, you lucky, lucky man. Finally, a Miss USA that’s beyond promises of world peace and baffling explanations of Americans’ lack of geographical knowledge. Olivia Culpo is a breath of fresh air.

And not just because she has something to say. The Rhode Island debutante is a far cry from the usual realm of tiaras and gemstones, donning a series of looks that are more at home at Milan Fashion Week than a Missouri beauty pageant. Ever since the #OscarsSoWhite debacle, it was achingly apparent that there was a huge vacuum where actors of colour should’ve been. We’re thrilled the Kerry Washington, amongst others, filled it.

Better yet, the New Yorker’s filmography is one of the strongest of her contemporaries with leading roles in Django Unchained and The Last King Of Scotland, and multiple Emmy and Golden Globe nominations. Watch this space. For all the anti-Russian sentiment of late, just consider Irina Shayk. The former face of Intimissimi is reason enough alone to book a one-way ticket to Moscow.

Following stints with Armani, Elle and an appearance in Kanye West’s music video for ‘Power’, Bradley Cooper’s missus has been keeping life on the DL since the birth of her daughter, Lea. We can’t wait for the inevitable comeback. Ashley Graham: proof that beauty comes in all sizes, and a collective sigh of contentment from men and women the world over.

The 29-year-old American model has changed the perceptions of an industry obsessed with cookie cutter sizes, and although there’s much more work to do, we can sit Graham atop a trend that’ll stimulate some welcome change. If this is what plus-size modelling looks like, keep on adding. Jasmine Tookes really is a woman of the world. With African, Central American and British heritage, the California girl has walked for Miu Miu, Versace, Dolce & Gabbana, Marc Jacobs, Saint Laurent and Tom Ford amongst others – all at the tender age of 26.

Plus, thanks to a rolling contract with everyone’s favourite babestable Victoria’s Secret, this child of the world is set to take the globe. Just a shame she’s not in ours. Mother of Dragons, Queen of the Andals and the First Men, Breaker Of Chains (and hearts), Emilia Clarke’s racked up a series of titles to rival Liz Windsor herself. They’re all very well-earned indeed, too.

Okay, so they’re all fictional. Ever since Clarke appeared on our screens as Game Of Thrones‘ Daenerys Targaryen though, we’ve been hooked to this new brand of swords, dragons and shagging. Next up: the Han Solo movie. Geeks everywhere rejoice. Victoria’s worst-kept secret has to be Adriana Lima. The Brazilian demigod made what could be one of the tackiest runway shows on earth, a must-see culutral phenomenon, leading a pantheon of beautiful woman to follow suit.

The 36-year-old is also a mother of two while still achieving the title of Victoria’s Secret’s most valuable model. Probably why she keeps going back. Don’t ever discount Bollywood. Not only is it one of the most profitable film industries in the world, it’s given rise to starlets like Priyaka Chopra to spread the message abroad.

Appearing in over sixty films across all four corners of the globe, the actress caused the world to listen up to Indian cinema and, better yet, take it seriously. She’s also making the switch to Western movies, with a raft of blockbusters already under her belt.